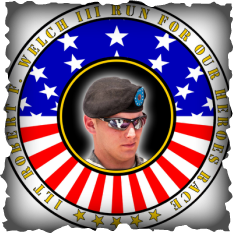 As the foundation's President and founder, Becky Welch oversees all programs and charitable events. She is the proud Gold Star Wife of our charity’s namesake, Army 1LT Robert F. Welch III. Their love story began back in the eighth grade. Becky and Rob were blessed with nearly thirteen years together, half of which as a married couple. They and their two little boys were stationed at Fort Knox, Kentucky where Rob was Bravo Company XO of the 201st BSB 3rd Brigade 1st Infantry Division. While stationed at Fort Knox, Becky served as the FRG co-leader and worked to help support families within the company. She was very active within the military community and took part in many different programs including her church, Care Team, and the Fort Knox Spouses Club. She loved everything about their military life…the most important of which was supporting her own soldier. On April 3, 2011, Becky received a knock on her door that would change her life forever… that night she was notified a rocket had been launched in Rob's duty station in Afghanistan, Forward Operating Base Salerno, and he had been killed. Becky is very vocal  she would not have been able to make it through this dark time in her life had it not been for her faith in God and the support of so many family and friends. Since her husband left this world for his “Deployment to Heaven” her mission, has been to keep his and all our fallen heroes’ memories alive and make sure all is done to thank and support those who chose to answer the call and serve our great nation. Along with her best friend and co-founder, Alicia Young, Becky set out to organize a yearly event to honor and preserve the memories of our fallen military heroes, like Rob and serve as a way for the community to thank our local military service members, veterans, firemen, police, and first responders. The 1LT Robert F. Welch III Run for our Heroes was born. The event has grown substantially each year since , with more and more people wanting to come out and participate. The 1LT Robert F. Welch III Foundation has been the result of hard work, collaboration, and sheer determination. It is an organization which strives to honor our past, present, and future heroes….heroes who understand the meaning of sacrifice and selfless service. As Becky reminds everyone each year, “Our fallen heroes are never really gone so long as their names are always remembered and their spirits are carried on.”

Becky, along with her two children, Aaden and Robby, now live in Wylie, Texas which also serves as the charity’s home base of operation. Becky has a Bachelor’s degree in Interdisciplinary Studies which she earned from the University of North Texas. She is currently attending Graduate School at UNT and working on obtaining her Master’s degree in Counseling. Becky is an active volunteer within her hometown. On top of running the 1LT Robert F. Welch III Charity and organizing the yearly Run for Our Heroes event, she thoroughly enjoys spending a great deal of time volunteering at her children’s elementary school both in the classroom and with the PTA. Other programs she enjoys helping with include Meals on Wheels, the Wylie American Legion, Wylie American Legion Auxiliary, and the Wylie Education Foundation. She loves spending time with her family and friends, running, traveling, going to the movies, and taking in the occasional target practice at the gun range. She enjoys participating in local charitable events each year including Snowball Express, Carry the Load, and the Army 10-miler in Washington, D.C. One of Becky’s favorite sayings is, “Life’s not about waiting for the storm to pass…it’s about learning to dance in the rain,” and that is just what she has set out to do with her life.